S.R.: First question: How do you conceive your work in relation to Conceptual art?

S.C.: I think the beginning of the work is deeply subjective. I start with something that might happen to me, and then as I start reflecting on it, it begins to open up. And I read perhaps first around the question that I’m occupied with, the inquiry. And it’s only when I’m beginning to get a sense of the sharpness of my inquiry that I start to relate to other forms of adressing that inquiry which would be the time when other peoples‘ practice or other ways of framing the issue would come in. I don’t know if that’s what you want to know.

S.R.: In the sense of what you said: What was the strongest influence on your work?

S.C.: I wouldn’t say I have any one single strong influence, I have multiple influences. I’m quite strongly influenced by, perhaps if I speak about the particular work here. It’s a good example. The work draws from Indian mythology, philosophy, European alchemy, contemporary discussions and discourse on the city, thinking on ecology, as well as a very personal interest in medicine, homeopathy, etc. So it all comes together. These are very multiple kind of influences in terms of thinking. 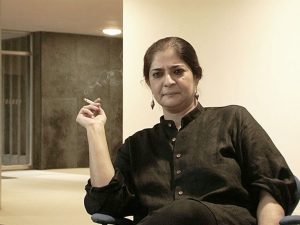 S.R.: What do you think is your specific influence in the history of art?

S.C.: It would be hard for me to pinpoint particular influences or particular periods because I’ve absorbed an enormous amount. I’ve absorbed the whole western tradition because that is what is taught in India. And I’ve also absorbed the Indian tradition. I’m constantly rediscovering both. I would say that I’m quite strongly influenced by the Indian folk tradition rather than the classical tradition. Because I feel a lot of affinity with the kind of forms and ways of doing things and ways of seeing that emerge from something I think of as local?

S.C.: To provoke thinking, to create a space within which some questions can be opened up, to tighten certain questions and perhaps re-frame things that we experience in ordinary life, using the language of my art practice to find a new reflection on it. It is really to try and open up consciousness. The active making the work is itself for me a process of doing that with myself and then there is the desire to share that process with people who come to, I don’t say viewer, I say participant.

S.R.: How and when did you hear or learn about Conceptual art?

S.C.: Twenty years ago, 15, 20 years ago. I would say that, yes, I have been quite exposed to the entire history of Conceptual art in the west. I would also say that a lot of classical Indian forms are what I think of as conceptual. If I see, if I look at it philosophically like today we talk about post-modern position, if you look at Buddhist theory of dependent origination, they are very very close, and I go between the two.

S.R.: You describe this as territories, what do you mean with territories?

S.C. I think of them as philosophic insight, philosophic paradigms. And I find this opposition of eastern thought, western thought actually specious. Obviously I find my own way through these paradigms and I interpret it very much through what makes sense to me.

S.R.: One last question: How do you describe your ideal typical daily work as an artist? Is there an ideal situation? 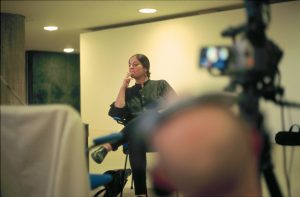 S.C.: One is the simple material constraints because the kind of work I do is work which – because it’s conceptual work, installation work it is not appropriate for the market – so there is a simple question of money, that is one level. The other is, it’s linked, its access to facilities. It’s not that we don’t have it, it’s just that it’s very expensive, so it’s out of reach. I often do a lot of my work in my head. Because I can only afford so many studio hours I end up doing an enormous amount of work just within my own mind. So that when I going in I’m very clear. I don’t have the possibility of playing around with equipment, for example. It’s a good discipline in certain ways but sometimes it would be nice to have the luxury. The other way that’s difficult is I think, I miss more interaction amongst, I think there is a large body of painters and there is a very small number of people who are doing the kind of work I do. And I would seek more dialogue, more exchange, more interaction, and that’s why coming here is interesting because you actually get that. And there are things which I think link theoretically, conceptually much more to western traditions. Where you find some absence of paradigms with other people that you speak to in India, so it’s nice to find the recognition here. While here you find the absence of recognition of some other paradigms.

S.R.: If you want to say something, which is important for you and you haven‘t touched this in your answers?

S.C.: I think it’s important to look at Global Conceptualism within the frame of globalization today because we are in a sense at a different moment economically, politically, socially. One’s sense of self and one’s sense of location is going through rapid changes. We’ve always had multiple selfs, also particularly because of the colonial experience. But what’s happening right now is different, it’s of another order. So I’m cautious about using categories because I think we are actually going to be re-working a lot of these frames.